Faces, whiplash, and the reign/rain of love

How is your Monday going? Me, I just have a little case of whiplash. Other than that it’s another fine day in the working world.

No worries, folks. I don’t have real whiplash from a car accident. I have the emotional whiplash that results when life presents startling contrasts in very different contexts. Let me explain.

Yesterday PW and I went to see Speakeasy Stage’s production of Neil LaBute’s play “reasons to be pretty.” As part of Speakeasy’s “Spirituality and the Arts” talkback series, PW and Rabbi Berman take the stage after one of the Sunday matinee performances of each play in Speakeasy’s season, to lead a talkback on the religious, ethical, and spiritual themes of the play. I love these talkbacks. They give the audience members (as well as cast and crew members) who stay behind an opportunity to sit with the play a little longer, to reflect on it while it’s still fresh.

“reasons to be pretty” begins in the middle of a knock-down, drag-out, dog-eat-dog, vicious, malicious argument between a young couple who have been together for four years. The woman is enraged because her best friend has just called to tell her about overhearing the boyfriend describe her face as “regular.” The rest of the play involves watching two couples deal with the ripple effect of this comment, and how people’s reactions to it destroy some relationships and strengthen others.

Apparently “reasons to be pretty” is the third play of LaBute’s trilogy on our culture’s obsession with beauty and appearance, particularly that of women. It’s hard to watch, like any art that holds up a mirror to the things about our selves and our culture that we’d rather not look at or be reminded of.

The whiplash occurred when I came into work this morning to an email broadcast from our hospital president’s office. The email announced that sometime last week a team from our hospital completed the first-ever full face transplant conducted in the US. When confronted with images of a man who essentially didn’t have a face at all, I found myself thinking completely differently about the linchpin of LaBute’s play: the insult of being described as having “a regular face.”

My communications team assembled in a conference room at 11 am this morning to watch a live webcast of the press conference, which included most of the more than 30 people who worked for more than 15 hours to replace the facial area of a man who lost most of his face when it came in contact with an electrical power line a couple of years ago.

During the press conference, the lead surgeon spoke, almost in passing, about how appearance is one of the ways we communicate, and how important our faces are to communication. Then he told a story about a man who has received numerous reconstructive procedures at this hospital over the years, after enduring a disfiguring accident. When the doctor asked why he continues to undergo these painful procedures, the patient replied, “One of these days, I just want a cab to stop for me, instead of passing me by.”

I think I would have been moved by those comments anyway, but they were almost too much to bear while the themes and words of LaBute’s play are still echoing in my head.

It’s not unusual to make or hear comments about putting on a new face. I’ve heard many women refer to putting on makeup as “putting on my face.” Starting today, the face has a whole new meaning for me—regardless of whether it could be described as “regular” or superior or plain or perfect. Starting today, a young man in a hospital room a few blocks from here has a new face, thanks to his own courage, the ingenuity of the medical community, and the extraordinary generosity of the donor’s family.

This brings me to today’s Psalm/Psong. Last year, Bettye LaVette released an album of interpretations of the British Rock songbook. We first heard her this past New Year’s Eve, at a free concert in Symphony Hall, as part of Boston’s “First Night” celebration. When she introduced one of the songs at that show, she talked at length about how many of the songs on this record were her “nemeses” when she first heard them.

Apparently, the British Rock boom brought on by the Beatles, the Rolling Stones, and others of that ilk, eclipsed many of the black artists who were her heroes when she was growing up (she’s in her mid-60s now, with grandchildren). She described that era as being like waking up in an alternate universe, where, one day, she couldn’t find any black artists on the radio stations of her native Detroit, because everyone was playing the British rock of white boys who were, for the most part, inspired by black R&B and blues singers. There are plenty of interviews, both printed and on video, where LaVette speaks movingly about wrestling with these songs to figure out how to make peace with them and make them her own.

It’s tough to pick just one of these Psongs, and when I started writing this I had already picked out her cover of the Rolling Stones’ “Salt of the Earth.” However, the course of my morning has changed my mood. So today’s Psalm/Psong is Bettye LaVette’s goosebumpy cover of The Who’s “Love Reign O’er Me.” Here’s a shout-out to my in-law Billy, who last week posted a comment here that included a video The Who performing this song. This particular video is from the Kennedy Center Honors ceremony of 2008, where The Who was recognized for their contributions to music. The bonus: you get to hear LaVette sing and watch Roger Daltrey and Pete Townshend respond to her rendition.

Happy Monday to you and your faces. May love reign and rain all over you.

Posted in Life in General, Music, Psalms/Psongs for Lent 2011

Who would believe a sukkah in the churchyard? Yes!

PW refers to Emmanuel Church’s relationship with Boston Jewish Spirit (BJS) as similar to an interfaith family. There is an increasing amount of what I think of as cross-fertilization between the two communities. Members of Emmanuel frequently attend BJS services, Torah study, and special events, and vice versa. There is also a growing number of interfaith couples who belong to both congregations.

Our communities often combine forces to put on events. For example, tomorrow we begin the third season of the Art and Spirituality talkback series at Speakeasy Stage, what PW calls “The rabbi and the priest go to the theater.” Usually a dozen or so people from each congregation attend the play together, and then the entire audience is invited to stay afterwards to participate in a discussion led by PW and Rabbi Howard Berman. This series has grown in popularity and at the end of last season, there were usually 40-50 people staying afterwards for the talkbacks. Sunday’s play is Sarah Ruhl’s latest work, “In the Next Room (or the vibrator play).” I can’t wait to hear what spiritual themes Rabbi Berman and PW discover in this one!

One of the new door signs

This past Sunday, Emmanuel Church began the celebration of its sesquicentennial. In a planning committee meeting this summer, I suggested that our sesquicentennial slogan could be “150 Years of Trouble,” since the church archives reveal that it’s been an edgy — even outrageous — place from the get-go. In celebration of making it this far, I engaged some graphic artists in the congregation to develop some new door signs, with a far better slogan that PW created.

At the beginning of the celebratory luncheon after Sunday’s service, PW explained the slogan on the signs: “Emmanuel: 150 Years. WHO would believe it? Yes!” As she said in both her remarks on Sunday, and in an upcoming church newsletter article, “According to the Zohar, the 13th century foundational document of Jewish mystical tradition, ‘Who’ is a name for God.  The Zohar says that when you gaze up to the stars in awe and wonder, ‘Who created these?’ (the question asked in Isaiah 40:26), in that very moment you will discover the answer: ‘Who created these!’ It’s a little like the old Abbot & Costello routine. Who is one of the many names for the Holy One.  So the answer to ‘Who created these?’ is ‘YES!’ ‘Who did??’  ‘YES! Who did!'”

PW continued, “Who would believe that Emmanuel Church is 150 years old? YES!  OF COURSE! We are inheritors of a collection of Holy Scripture, in the Hebrew Bible and in the Christian Testament, that testifies again and again that it is God, Who, believes in people, no matter how unbelievable we are. So, Who would believe it. Who does believe it!”

In keeping with the Emmanuel-BJS cross-pollination, the president of BJS attended Sunday’s church service and the celebratory luncheon that followed, where she offered a congratulatory message from BJS. To illustrate the uniqueness and power of the growing partnership between our two communities, she shared this story. 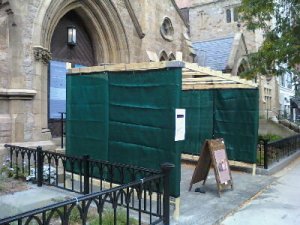 A couple of weeks ago, BJS built a sukkah outside one of the church doors, in celebration of the Jewish festival of Sukkot. This is the second year in a row that BJS has built what we’re pretty sure is the only sukkah in the Back Bay neighborhood of Boston. It’s definitely the only sukkah in the swanky shopping district of Newbury Street.

As they were working on the sukkah, an Israeli Jewish woman stopped to take in what they were doing. After a period of stunned silence, the woman asked, incredulously, “You’re building a sukkah in front of a CHURCH??” The BJS folks responded, “Yes!” During the long silence that followed, the woman considered this paradigm-shattering information. She asked a follow-up question, “Do they KNOW that you’re doing this?” The BJS folks laughed and said, “Yes!” More silence before the final follow-up, “And they’re OKAY with this???” “YES!” [I don’t know whether the woman walked off in her cloud of unfathoming, or whether she stayed to get an explanation. I hope it was the latter.] The president of the synagogue concluded the story with a toast to 150 more years of ground-breaking collaboration between the two congregations.

WHO would believe a sukkah in the churchyard? Yes! L’Chaim!